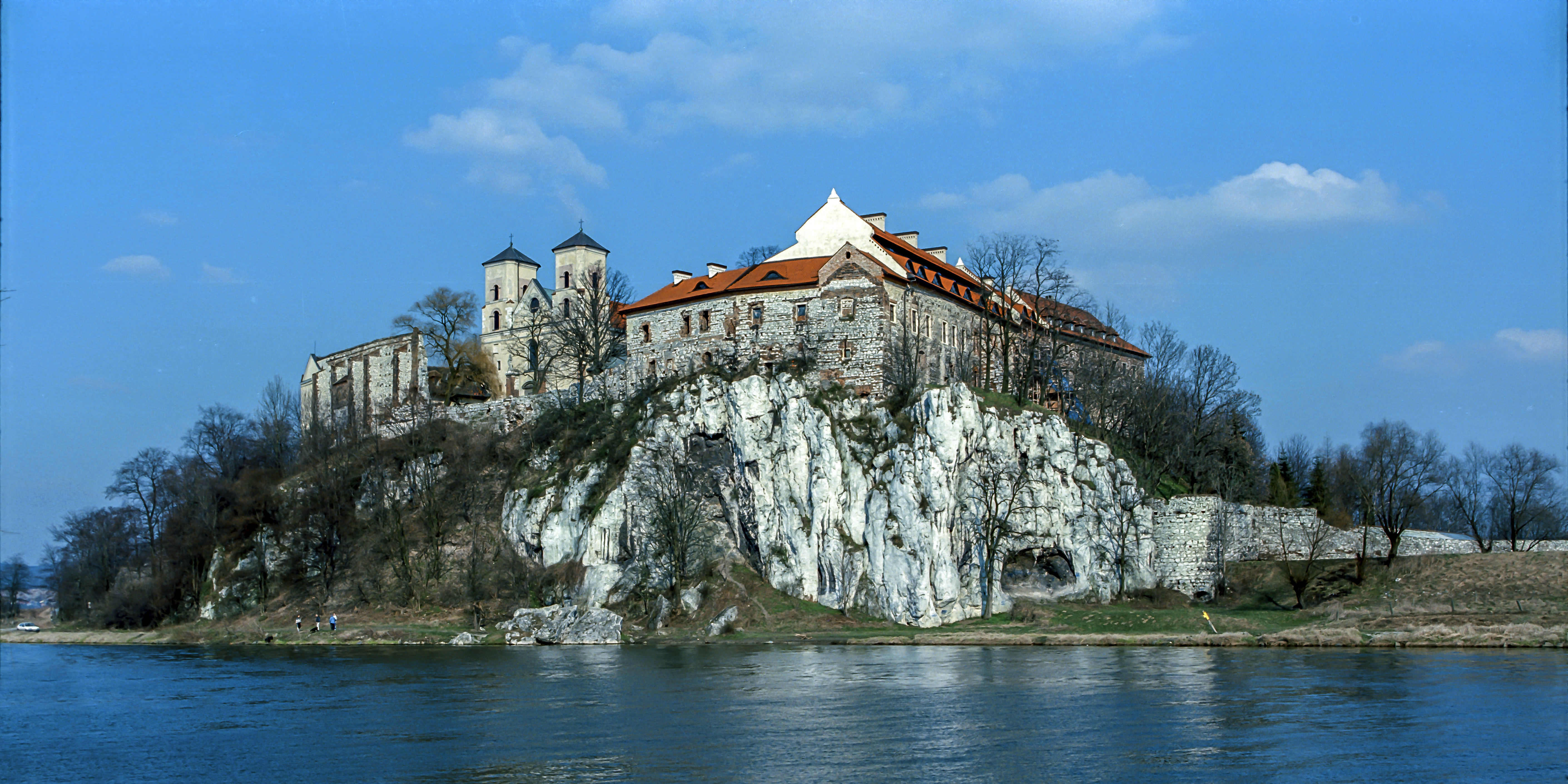 Turning right after the Dębnicki Bridge, turn right from the busiest route in the city, you suddenly reach the Dębnicki Market Square – sleepy small town square. By bus, e.g.. #112 in a dozen or so minutes (12 km from Krakow) from there you can move into the middle of the dark middle ages, such, what – with vivid imagination, such a comparison may come to mind – Umberto Eco appeared in the Name of the Rose. Every bus passenger will say, where to get off, to get to the abbey - one of the three Benedictine monasteries in Poland. Way to the right, which passes the cemetery on one, and the old farm buildings on the other hand, podchodzi na opadające urwistymi skałami wprost ku Wiśle wzgórze. From time immemorial, it was used as a stronghold by various prehistoric peoples (Przeworsk culture, Celtic, Tyniec). Over the years 40. XI w. they are constantly working and worshiping God there, monks in black habits. I credo to: Pray and work; – pray and work.

The abbey is entered through a huge gate. Through the narrow courtyard and the second gate, you can enter the top of the hill, which overlooks the oxbow lake of the Vistula. Once a mighty abbey built in the 11th century. in the Romanesque style, rebuilt many times, it was given its final shape in the Baroque period, so from the baroque walls only in places (on a mug) they stand out from the stones, Romanesque fragments. Abbey, founded by Archbishop Aaron, educated staff for the organizing Polish Church. Later, for many hundreds of years, people escaping from the hustle and bustle of the world found refuge here. Even the laity, who want to reflect on themselves under favorable conditions for contemplation, found hospitality in Tyniec. This beautiful custom has survived to this day. At the abbey, where there has been worship of God for centuries, a modern translation of the Scriptures was created. Old and New Testaments known as the Millennium Bible.

Benedictine Church of St.. There are archeological relics hidden under the floor of the presbytery of Piotr and Paweł – foundations of a romanesque church from around the 11th century, unfortunately not available to visitors. In years 60. Early Romanesque graves of seven abbots from the 11th-13th centuries were discovered here. In one of the graves, the so-called Tomb of the Golden Abbot (due to the gold relics discovered there) a goblet made of pure gold with a patina was found, used as a traveling goblet. It is the second traveling goblet in the world from this era.

Prayer rituals have hardly changed since 540 r., when Benedict of Norcia established the rule for the first Benedictine monastery at Monte Cassino. Every day, Fr. 15.00 (on Sundays and public holidays for Fr. 14.30) you can listen and watch (and there is what) vespers sung by monks in Latin. You can come to Tyniec before dawn, climb the hill past the cemetery and Fr. 6.00 listen to matins, that is, the first morning prayers of the congregation. Sometimes it does happen on summer days, that at the end of the prayers the sun rises and illuminates the great stained glass window above the main altar. The spectacle is so beautiful, that the stained glass represents the sun, and more precisely, Jesus the Savior as the Sun of the Universe.

Once a village, and currently Tyniec, which belongs to Dębniki, lives in some unreal, metaphysical, but a noticeable shadow of the abbey, which is not referred to here otherwise than the monastery. And yet, until recently it was possible, after spiritual experiences, get drunk in the no longer existing inn, Pod Lutym Turem – it was in it that Zbyszko from Bogdaniec vowed undying love to Danusia Jurandówna.

Tyniec was inhabited even before the Benedictines. Somewhere in the time between the 8th century. before our era and the 2nd century. our era was a defensive settlement. Opactwo powstało .dopiera’ w XI w. The first Benedictines came to Krakow from the Rhineland in 1044 r. thanks to the efforts of Kazimierz the Restorer. Famous Bishop Aaron, mentioned on the occasion of Wawel, he was their Abbot, at the same time performing the functions of the bishop of Krakow. In addition to creating culture, Tyniec abbey performed an extremely important defensive function thanks to its convenient location on a limestone one, steep hill, at the strategic breakthrough of the Vistula River.

Tyniec functioned as a fortress for several centuries, until the second half of the 18th century, until it was destroyed by Russian troops. The abbey also deserved a nest of resistance from the Bar Confederates, who left this place on the first stormy night and through an underground passage to the Wawel Castle, bouncing it off the hands of the Russians. W 1817 r. the order was dissolved. The Benedictines left Tyniec, and many of their priceless books and documents were transported to Lviv, where in the 19th century. gone. The return of the Benedictines took place in 1939 r., and in 1969 r. the monastery became an abbey again.