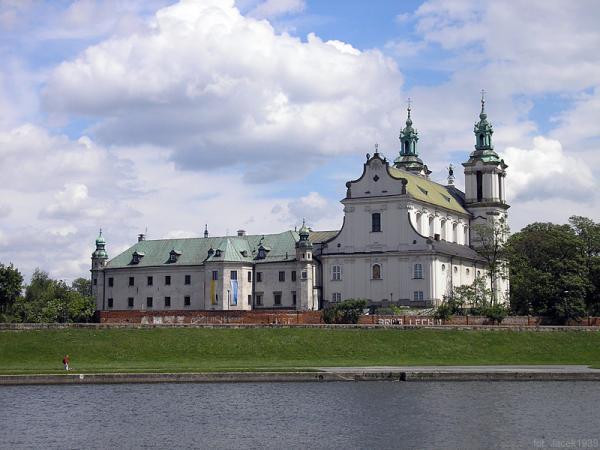 Skałka is a Jurassic limestone hill near Wawel, where even before the 11th century. there was a cult center of the Vistulans. W XI w. a Romanesque temple was built on this site, which in 1079 r. she witnessed one of the most famous and mysterious murders in Polish history. A legend spread for centuries, backed by the authority of Gallus Anonymus, it proclaims, that the king of Poland, Bolesław the Bold, he sentenced the bishop of Krakow, Stanisław from Szczepanów, to the death penalty for high treason. The legend specifies in detail the type of death, what happened to Stanisław; He was dealt a death blow with a sword at the altar of the temple, the body was dragged outside and chopped into a stump. There are discrepancies as to the fate of the martyr's remains, one version insists on throwing them into a nearby pool, another goes towards the Vistula. Anyway, the body was buried in the Na Skałka church, where it rested by 10 years. W 1089 r. they were moved to the Wawel Cathedral. Soon after the bishop's death, Bolesław the Bold will leave for reasons that are not fully explained! forever country. In year 1253, so over 170 years after the tragic events, The Catholic Church in the person of Pope Innocent IV canonized the martyr, then Saint Stanislaus of Szczepanów was chosen as the main patron of the Kingdom of Poland. This man's position in the pantheon of Polish saints is special: Polish kings were crowned in front of his coffin at Wawel, who then made a walking pilgrimage from Wawel to Skałka, in order to atone for the act of Bolesław the Bold. However, many historians are becoming increasingly suspicious, that the figure of the bishop was not so luminous, and the meaning of his death – so obvious. The objection is made, that the bishop had betrayed the authority of the Church, and the fact of his death was used in political games. In support of the latter, the argument of the late date of canonization of St.. Stanislaus – almost 200 years after death – and this, that earlier sources do not even mention the bishop's tragic end. The cult of the saint has survived to our times, influencing the architecture of the Na Skałka church and the importance of this temple as a center of worship.

The iron gate, forged in 1894 r., through which one enters from ul. Skałeczna to the Pauline monastery, announces the aesthetic impressions awaiting visitors. Behind the gate there is a view of the baroque facade with two symmetrical towers and characteristic "sweeping" stairs leading to the upper level of the church of St.. Michael. Looking at the exuberant shapes and sizes of the facade, you can expect a lot from the interior, which in the meantime turns out to be tight, although extremely interesting.

One of the most elegant Krakow baroque altars is located in the presbytery. It has greenish-cream columns and figures of angels with wings of the right size. In the center there is a painting from the 18th century. depicting St.. Michael the Archangel, the patron saint of the temple. However, the altar in the left aisle seems to be more important than the main one (standing facing the presbytery), made in 1745 r. from Dębnik marble. It was put in place, where – as it is believed – 11 April 1079 r. Saint Stanisław from Szczepanów celebrated his last mass and where he was killed. In the altar there is a painting of St.. Stanisław with a sword stuck in his head. Have to admit, that this image does not match the typical image of a bishop: the one in the painting looks more like a Spanish grand than a Slavic saint. In the bottom, the glazed part of the altar is covered with a part of the trunk, on which 900 years ago, Stanisław, who was dragged out of the church, was dismembered, more to the right, through the three round holes you can, though with great difficulty, to spot a stone soaked with the blood of a martyr.