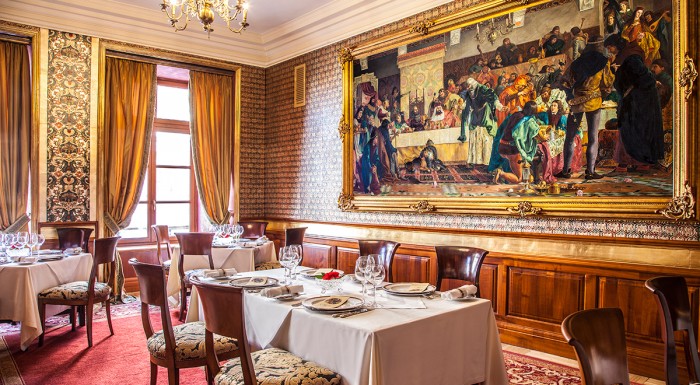 Krakow has always been famous for its good old Polish cuisine. Stories were told about the local cellars and pantries, which were full of jars and barrels with all kinds of pickles, borscht, smoked meats, cabbages etc.. Krakow was also famous for several types of groats served with meat. Over the centuries, influences from other European cuisines have permeated the native tradition over the years, especially Hungarian and Austrian. Recently, Galician cuisine has become very popular and fashionable again. Turkey roulades are served in almost every restaurant, baked pork chop, tenderloin, plus salads and salads. Apart from elegant restaurants, there are many smaller eateries and fast food bars in Krakow, where you can also eat well.

Wierzynek
Main market 15, tel.4221035
A very elegant and world-famous restaurant specializing in Old Polish cuisine. According to tradition, w 1364 r. the first owner of this place, Mikołaj Wierzynek, hosted European kings and rulers – guests of King Casimir the Great. Even today, the city and state authorities used to host well-known political figures in Wierzynek, science and culture. On the first floor, there is a banquet room with a historic 18th-century polychrome, on the ground floor there is a cafe with renaissance decorations. Another, smaller, located in a gothic cellar, offers excellent drinks. A dinner for two in these elegant interiors costs approx. 70 – 100 PLN.
Open daily 12.00-23.00.

Hawelka
Main market 34, tel.4220631
The restaurant is located inside a historic tenement house, the so-called. Spiš Palace. It was established in 1876 r. and initially acted as the so-called. breakfast place. It currently consists of three levels. There is a Hawelka restaurant on the ground floor with good food and moderate prices. On the first floor in the so-called. Tetmajerowska Hall (from Włodzimierz Tetmajer, whose paintings decorate the premises) you can order very good, but also very expensive food. Three cozy café rooms in the basement of the restaurant offer a good selection of wines and drinks.
The restaurant is famous for its specialties of Polish cuisine, such as: coolers, tripe, prepared in various ways. The Krakow style duck with mushroom sauce is especially worth trying, traditionally served with groats and selected lettuce.
Hawelka also rents rooms for parties and occasional meetings. Free booking.
Open every day. 10.00-22.00, café 12.00-22.00.

Grand Hotel
the. Sławkowska 5/7, tel.4217255
The interior of the restaurant is the former ballroom of the palace belonging to the end of the 19th century. to Prince Aleksander Czartoryski. His wife Marcelina organized social meetings for the Krakow elite here. In the interwar period, it was a meeting place for the Krakow cultural world. Henryk Worcell's novel Zaklęte rewiry tells about the atmosphere of the pre-war Grand, who, incidentally, worked here as a waiter. Today, in a huge hall, The adjoining offices or on the balcony mezzanine, you can feast your eyes on the Art Nouveau décor, satisfying hunger with traditional Polish dishes. Unfortunately, it's quite expensive here. You can pay by credit card.

Elektor
the. Szpitalna 28, tel.4218025
One of the most expensive restaurants in Krakow. It is cooked according to the traditional recipes of the cuisine of aristocratic houses, and the cellar is famous for the best drinks in Krakow.

Karczma Pod Blachą
the. Piastowska 22, tel.4238623
Former wooden inn converted into restaurants. It invites you to traditional Polish regional dishes: steaks, cutlets, doves, dumplings… In the evenings a folk band plays, which sounds you can play with, admittedly not until dawn, but to 23.00. Moderate prices. The inn can be rented for a party or a social event.

Chłopskie Food
the. st. Agnieszka 1, tel.4218520
Głogczów 19, tel.090315813
This restaurant stylized as a country inn is a branch of a popular restaurant located near Krakow on the road to Myślenice. Name, decoration, menu and prices – similar in both places. You can order such local specialties here, how: steamed dough dumplings, ribs, knuckle, hog roasted in plums, country bread with lard, and pickled cucumbers straight from the barrel.
Open every day. 11.00-22.00.

Baba Fish
the. st. Agnieszka 1, tel.4218774
Seemingly – continuation of Chłopskie Jadło - the same place, same staff. It is actually a separate restaurant. Coming in here, you can taste a sea adventure, because the interior looks like a sailing ship down to the last detail. Sea food too, mostly fish: zander, cod, trout, flounders, salmon, and on special order – pikes and sturgeons. Open 11.00-22.00

Blood and Rose
the. Grodzka 9, tel.4229694
It is difficult to walk indifferently along ul. Grodzka next to two hooded monks, who invite you to the interior of the premises. It is worth accepting this invitation just for that, to feel like in a medieval castle for a moment. The interior is decorated with knightly armor and combat tools, you can admire paintings on the walls, which look amazing in the candlelight. Old Polish dishes served here evoke a distant echo of feasts organized in the castles of nobles. It is worth ordering broth with dumplings and pork loin with plums. After the meal, customers are treated to an excellent rose tincture, whose recipe is kept secret.
Open every day. 13.00-24.00.