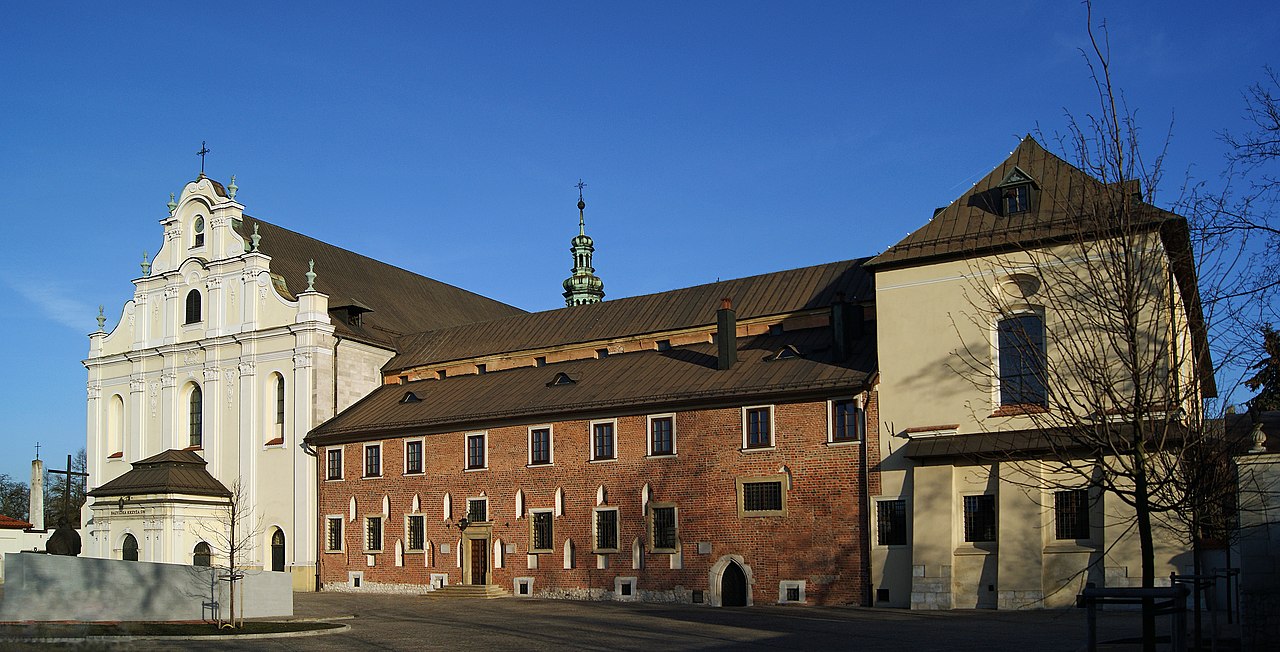 Before, however, the view of the monastery complex opens up, on the right, the small wooden church of St.. Bartholomew from the 15th century., where it is worth seeing the gothic oak portal above the entrance door and the rococo polychrome from the 18th century. The building is the only surviving example of a medieval three-nave wooden church in Poland.

In the extensive and architecturally diverse complex of Cistercian buildings, the central place is occupied by the Church of Our Lady of the Assumption and St.. Wenceslas – Cistercian basilica. It was built in the 13th century., but due to numerous alterations and renovations, its architecture has a lot in common with the baroque. The façade from the late Baroque period is permeated with a spirit of simplicity and modesty. The motifs of the early Gothic architecture have been preserved outside the chancel and the aisles on the eastern side. The main entrance doesn't look too fancy, other elements near the façade distract from it: tree, kiosk with devotional articles, arkady. But if someone steps inside the Cistercian Basilica, I will definitely stay there longer. The church is spacious, three-aisle, although the nave and the chancel are of the same width, because the whole was built on a cross plan.

From the very first moment you succumb to the charm of colorful stained glass windows. Rich wall paintings also attract attention. Frescoes in the transept and presbytery, which date back to the 16th century, they are the work of one of the Mogiła Cistercians – Stanisław Samostrzelnik. Late Gothic, the main altar, full of simplicity, placed against the background of three stained glass windows in a rare arrangement, with an expressive figure of the Madonna and Child, is a polyptych from 1514 r. The Cistercian Basilica with a crucifix from the 15th century brought the greatest fame. located in the sanctuary of Christ Crucified, on the right from the entrance, in the northern arm of the transept. The legend throws in its three cents about his origin: once, probably in the 15th century, three crosses flowed down the Vistula River. One of them ended up in St. Mary's Church, the second one is on the Wawel Castle, and the third to the abbey in Mogila. This sculpture of the so-called Lord Jesus Mogilski, placed among the splendor of thanksgiving offerings, he is an object of fervent worship: grooves in the floor are knee marks, where for centuries the faithful approached the altar. Today, miraculous properties are also attributed to the cross. Some do, that Christ's hair grows back, and words come out of the half-open mouth.

The construction of the Cistercians prioritizes architectural austerity over the richness of decorations and décor. Functionality becomes the primary criterion for a building. The structural system contributes to the native architecture of the Cistercians who came to Poland, thanks to which the building can be sealed thanks to the use of vaulted ribs, which strengthens the durability of the vault. From the times of the Cistercian buildings, the architect became the master of the vault, and not his slave, as Fr.. Iwo Kołodziejczyk.

If anyone would like to risk getting closer to the steelworks im. Sendzimira, should go al. Solidarity. After midnight (that is right) side, right behind the Dłubnia river, goes to the side of ul. Wańkowicz, where the eighteenth-century manor house that once belonged to Jan Matejko has been preserved, today used by the Society of Friends of Fine Arts.