DEVELOPMENT OF THEATER ART IN KRAKOW 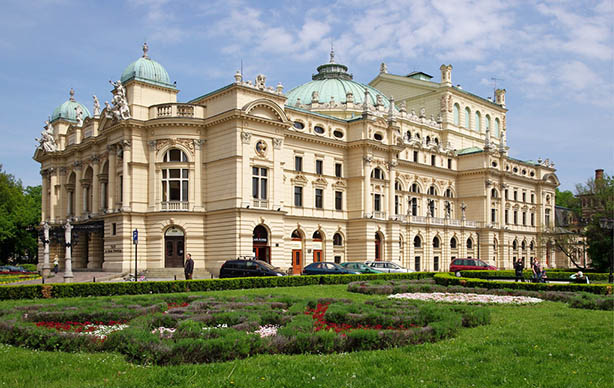 The beginnings of theatrical performances in Krakow date back to. XII. They are of a religious nature, into which folk humor is gradually woven. Nativity plays, initially arranged in churches, in the fifteenth century they move to the folk-bourgeois environment.

After the founding of the Krakow Academy (1364 r.), Students who study initiate with great passion secular performances, drawing on ancient themes, mainly using Latin. Wawel has witnessed such spectacles more than once.

The period of rebirth, so the times of the last Jagiellons, were conducive to the development of Rybałtów shows. The Polish language resounds here.

Theater in the full sense of the word was not established in Krakow until the 18th century. It is started by Jacek Kluszewski, the starost of Brzeg, giving performances in the Town Hall and the Spiš Palace. The father of the Polish scene then visits Krakow, Wojciech Bogusławski. In year 1799 Kluszewski is building from three tenement houses at ul. Jagiellońska and Plac Szczepański theater, now called them. H. Modrzejewska (formerly Stary Theater). It has survived to the present day and is, next to the court theaters in Łazienki and Oranges in Warsaw, the oldest building of this type..

After the fall of the revolution 1846 r. Austrians are trying to Germanize Krakow's theater, introducing German directors and the predominance of arts, played in German.

W 1863 r. includes the Krakow stage of St.. Koźmian. There is a twenty-year period of heyday of the Krakow scene, who commemorated the world premieres of the 'Confederates of Bar” (1872 r.) Mickiewicz, fifteen plays by Shakespeare (first time in Poland, translated from the original), „Fausta” i „Egmonta” Goethe, finally, Musset's comedy series. This theater cultivates our native drama by staging all A.. Fredro's comedies. Słowacki's works were first staged in Poland: "Mindowe”, „Beatrix Cenci”, "Prince Steadfast”, „Fantazy”, "Horsztyński” and for the first time in Krakow, "Balladyna” and "Lilia Weneda”.

A specific style of recreating dramatic characters is then created, referred to as the "Krakow school”, which characterized the distinguishing features and today good theater: depriving excessive pathos, good diction, restrained expression and great dialogue.

W r. 1882 the Viennese Ringteater is on fire, as a result of which the authorities order, due to the risk of fire, closing of the theater at ul. Jagiellońska for the whole year. During this time, at the former ul. Wolska (today Marszałka Józefa Piłsudskiego Street), in a carpentry shop adapted for this purpose, the theater still works, even honored by the performances of Helena Modrzejewska.

In the ongoing discussions about the need to build a new theater building, a decision is made to establish a new theater on the site of the demolished 17th-century St.. Shower. Building, designed by architect J.. Zawiejski was started in 1891 r., solemnly opening the theater 21. X. 1893 r. The theater is named after. J. Słowacki, on the centenary of his birth - 1909 r.

W r. 1902, at ul. Krowoderska no 31, in Oleszniak's bookbinder room, is being established under the direction of Knake-Zawadzki, the People's Theater, on whose boards Jaracz appears, Osterwa, Węgrzyn. Then the director of the Polish theater from Poznań Rygier runs the Ludowy Theater at ul. Rajska.

Currently, Krakow has the following theaters:

The People's Theater in Nowa Huta,

In the project - the resumption of the experimental scene of Mr.. n. Rapsodycznego Theater, possibly. Theater of Poetry. Occasional performances give:

Opera on the stage of the. Słowacki,