This street is the only peripheral street of Old Krakow. At no. 6 i 15 one of the departments of the National Museum in Krakow with the Czartoryski collection is located. 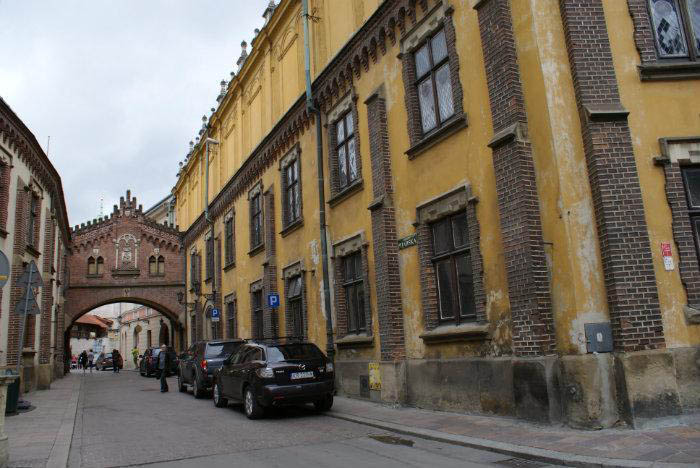 A SHORT OUTLINE OF THE DEVELOPMENT OF THE KRAKOW MUSEUMS

Collecting works of painting, sculptures, the artistic industry was initiated in the Middle Ages by churches, accumulating valuable items in their vaults. Undoubtedly, the cathedral treasury in Wawel was the most splendid of this type of collection. Secular art collections, of great value, are gathered by the Jagiellonians. From the collections of these, Only a small part of it has survived to this day 136 great tapestries, unlawfully detained in Canada. Zygmunt III and his son Władysław IV were also collectors of works of art. They also collect collections of magnate families, and sometimes also bourgeois, creating a new form of individual collecting of art objects.

Only the first public collections are collected by the Krakow Academy (today - Jagiellonian University), and then, in the first half of the 18th century, the collections of the poet-bishop are made available to the public, John Paul Woronicz in the bishop's palace.

W r. 1876 The Czartoryski family bring their museum collection from Paris to Krakow and place it in the extended post-monastery building of the Piarist monastery and make the collection available to the public.

W r. 1879 there is a project to establish the National Museum in Krakow; it happens in the Sukiennice, during the celebration of the 50th anniversary of J. I. Kraszewski. Henryk Siemiradzki present there, to start the harvest, offers his painting "Torches of Nero”. Over the course of history, the NATIONAL MUSEUM grows to 7 branches with half a million exhibits; constitute them:

Polish Painting Gallery of the 18th and 20th centuries, Collections of Polish guild art from the 14th to 17th centuries, Jan Matejko's house,

The collection of sculptures in the Town Hall Tower,

Collections of medals and coins. Czapski.

In the second half of last year. of the century, the museum collections of the Polish Academy of Arts and Sciences are created, which they constitute today 3 separate museums:

Archaeological Museum with a branch in N. Steelworks.

W r. 1911 the Ethnographic Museum is being built on the Wawel Hill, which after. 1945 obtains the former building of the Kazimierz town hall at Plac Wolnica to house its collections and is recognized by foreign visitors as one of the most beautiful ethnographic museums in Europe.

After the retreat of Austrian troops from the Wawel Castle in 1905 r. Polish society torn apart by three partitions, represented by the Wawel Castle Reconstruction Committee, arranges the royal palace; arise gradually:

The State Art Collection at Wawel and the Wawel History Museum, to which harvest it is, belong as some kind of subdivisions:

The Salt Works Museum in Wieliczka,

In a house donated by a distinguished historian from Krakow, Dr. Klemens Bąkowski at ul. st. Jana 12, Extremely rich collections of the Historical Museum are created, including. Krakow,

(such a museum was officially established by the City Council in 1899 r.).

The Lenin Museum was established with its branches in Biały Dunajec and Poronin, it alludes to the two-year stay of the great revolutionary in Kraków.

Museum of the Jagiellonian University,

Museum of Anthropology U. J.,

Collections of the Department of the History of Medicine,

The collections of the National Museum of the Czartoryski Branch are very diverse. Due to the political situation at the time of their formation (fall of Poland, national liberation struggles) part of the collection is associated with outstanding historical figures: e.g.. with Jan III, Anna Jagiellonka, Kościuszko, Czarniecki et al.

Next to them are examples of Polish furniture (Kolbuszow) and a foreigner, a richly represented art industry, a collection of Polish and foreign ceramics - one of the best in Europe; collected in a historical developmental system a collection of Italian paintings with the pearl of the collection - a portrait of Cecylia Galerani by Leonardo da Vinci; a rich collection of armor, with great examples of chicks (Shields); examples of Polish artistic weaving (Korelicze), Flemish and Persian, with a beautiful Persian carpet from the 16th century; examples of Polish painting from the 17th century. to Matejko, with his painting "Poland in chains”; collection of Dutch paintings, Flemish, German, French, with "Landscape Before the Storm" by Rembrandt; moreover - an ancient sculpture, the most numerous group in relation to the rest of Polish museums, as well as Egyptian and Ancient Greek ceramics - make up the splendor of this museum, which also has an invaluable archive, b. rich collection of engravings and a huge library. 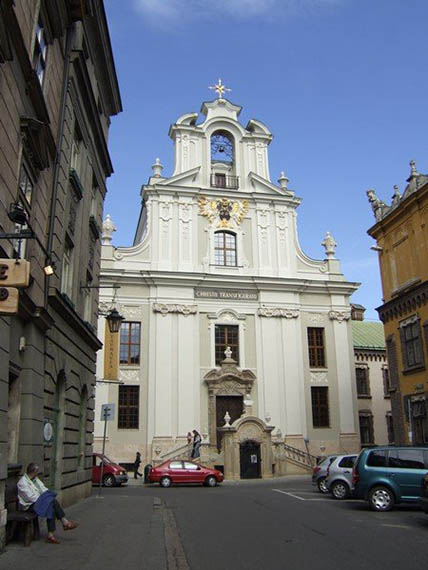 Church of o. Piarists. Picturesquely closing ul. st. Jana at ul. Pijarska-church oo. Piarists p. w. Transfiguration of the Lord, is one of the younger churches in Krakow. Built in 1718-1759 by Francis Placidi, is an example of late baroque. The three-part facade full of lightness shows the influence of Roman architecture. Three-nave interior, with a vaulted painting by Ekstein broadening the perspective. In this type of polychrome, the influence of Pozzo's decoration in the Roman church of S.. Ignatius. Interior fittings, its colorful altars - an example of great craft traditions - contributed to the creation of a single, a harmonious church interior, thanks to the blending of painting and architecture into an organic whole.

On the walls there are a number of paintings by Czechowicz and Radwański from the 18th century.

In the main altar there is a copy of the "Transfiguration of the Lord”, Rafaela.

On the right side of the altar, the heart of the great Piarist is embedded, youth educators, pcs. Konarski. His bust (the work of Błotnicki) is located at the entrance to the church.

Opposite the church - the former French Hotel, today - the Orbis hotel.