An outline of the history of Krakow 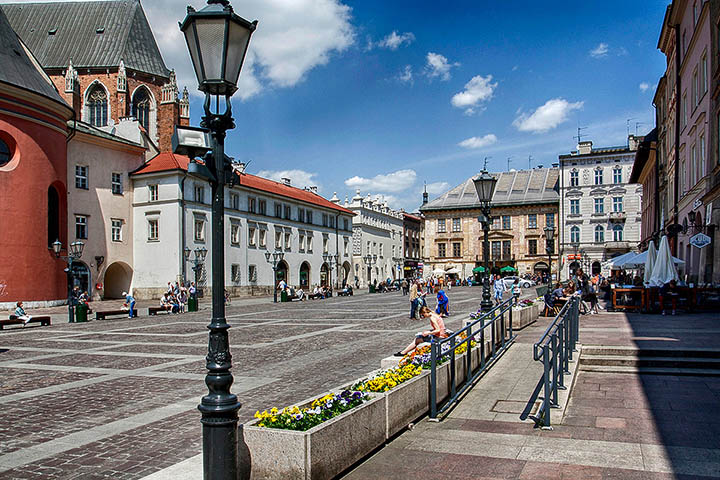 "When you want to know, what is it hiding
Our past in our womb,
As old fame burns:
Then eat, brother, to Krakow!“

“Since the dawn of its history, Krakow has always had the captivating charm of greatness, which is Poland alone, the focus of the inexhaustible Polish tradition, they prefer to persist and persevere. The hand of history has engraved the most profoundly on the stones of Kraków, the most indestructible name - Fatherland.

The castles of Greater Poland are famous for their knightly swords fighting against the Germanic flood, a center of rebellion against violence, Warsaw is famous for its unparalleled heroism, Krakow, on the other hand, is the place of the most indigenous spiritual content of national treasures”.

Archaeological discoveries on the Wawel Hill confirm the existence of man already in the Paleolithic era, ok. 200 thousand. years ago. Further excavations both in the city and its vicinity prove it, that in the times of the so-called. Lusatian culture, considered to be proto-Slavic, there was quite a densely populated settlement here.

The oldest word of mouth, described by the first Polish historian, Wincenty Kadłubek, in the early 13th century. there is an application about the tribal prince of Vistula, Krak and his daughter Wanda. The story was enriched with the story of the slaying of the dragon, persecuting the population near Wawel. Perhaps, that the figure of the dragon is a symbol of some invader, inactivated by the tribe leader.

The application has become immortal, and remained his visible traces: Smocza Jama at the foot of Wawel, and two peculiar monuments-mounds: Krakusa i Wandy, who preferred to choose death in the waters of the Vistula rather than marriage with a hostile prince.

W r. 966 a member of the legation of the Caliph of Cordoba enters the court of Otto I.. This Ibrahim son of Jacob from Spanish Tortosa writes in his diplomatic report, including:. in. and about Krakow. In his report, Krakow is already a trading settlement with warehouses of goods.

Archaeological excavations confirm, that the proto-Slavic (Sorbian) Krakow had a permanent and densely settled population. In the 10th century, Krakow was populous, busy, in contact with neighbors in all geographic directions. The settlements loosely scattered around Wawel were ancillary to the tribal leader.

Wawel has spread over ten centuries, sequentially, first witness development, power and splendor, then the collapse of the Polish state.

W IX w. the powerful state of the Vistulans, linguistically belonging to the Lechic group of the West Slavs., is conquered by the Great Moravian state, which resulted in the adoption of Christianity by the Vistulans, of the Slavic rite. In this way, the Vistula River by approx 100 years ahead of Western Polans in adopting Christianity.

The Great Moravian State is collapsing (906 r.), The Vistulans join the Polans into a single state body under the rule of the Piast dynasty. This moment causes the takeover of? Vistulans of the Latin rite.

The struggle of united Poland in the 11th century. with Brzetysław Czeski they destroy Poznań, the then capital and an important center - Gniezno, with the w 1000 r. archbishopric. W r. 1000, during the reign of Bolesław the Brave, next to the bishoprics established in Kołobrzeg and Wrocław, the Kraków bishopric is established. The pre-Romanesque church of Mr.. w. Virgin Mary (then late. Felix and Adaukta) turns out to be insufficient for the needs of a growing population. After a year 1000 so a Romanesque cathedral is being built at Wawel, brick, then destroyed during the reign of Kazimierz the Restorer (1038 r.) by the Czechs, led by prince Brzetysław. W XI w. Krakow takes over the functions of the capital.

The Benedictines brought from Leodium set up an abbey in Tyniec near Krakow, contributing to the transplantation of Western culture to these areas.

The second half of the 11th century. (1079 r.) is marked by a dramatic fight between Bolesław the Bold and the Bishop of Kraków, Stanisław Szczepanowski.

Our history is written by a chronicler, the alien Gallus Anonimus.

The reigning Bolesław Krzywousty divides Poland in 1138 r. between sons, making Krakow the seat of the senior prince. As a result, a period of devastating fights for Krakow begins between the sons of Krzywousty.

Arabic geographer Muhammad il-Idrisi w 1154 r. confirmed by m. in. dexterity of artisans, the dense buildings of the city and the fertility of the Krakow Land.

The rulers change, and the seniority is overthrown. Poland is divided into grant principalities, Krakow and Sandomierz are one of them. Leszek the White, prince of Krakow (1202—1227) consolidates governments. Krakow comes under the rule of the Silesian Piasts, striving to unite Poland into a single whole.

At the time, ok. 1228 r. Iwo Odrowąż, the bishop of Kraków, organizes a trade and market center near the church of St.. Trinity (year of establishment 1223) which is already a typical municipal commune, with the Polish population.

In the same quarter of a century, Bp. Krakow's Wincenty Kadłubek writes down our history and establishes a legal study, the seed of the future Academy of Kazimierz.

Growing development of culture, mind and material life is suddenly interrupted by an attack by the Tatars in 1241 r. Only at Wawel and in the defensive church of St.. Andrzej, the people who took refuge were saved; the rest of the city was destroyed.

W r. 1257 the reigning Bolesław the Chaste grants the town a location privilege. The city is built on a rectangular plan with rounded corners, with a checkered street layout, with huge, square (4 he has) market, partially populated with imported Silesian craftsmen. Prince, establishing hereditary vogt, gave the city commercial rights and its own judiciary, which was conducive to the great development of the city. Granted municipal autonomy, i.e.. the privilege of establishing rights for the urban population, became independent city council.

Around the 80's of the 13th century. on the initiative of Leszek Czarny, the first fortifications of the city are being built.