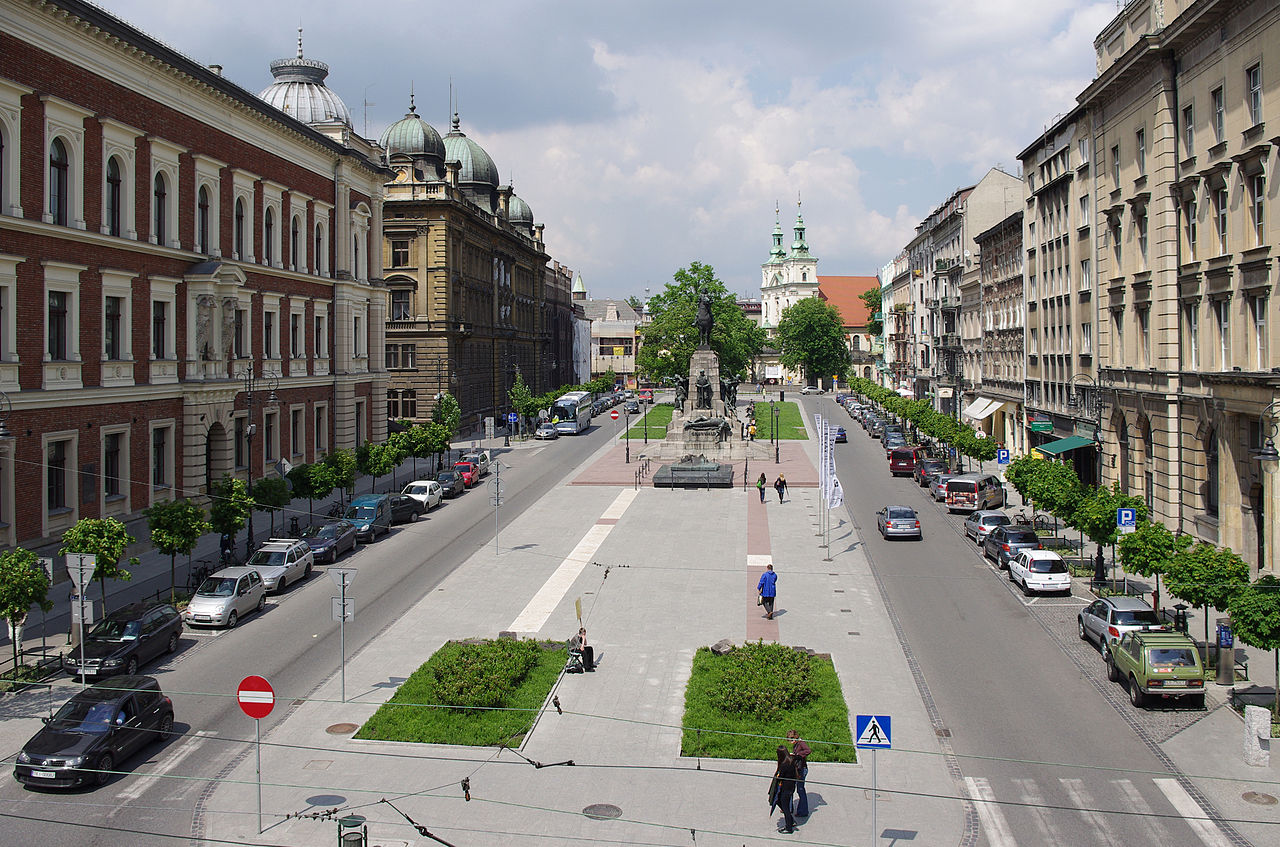 Narrow, long Matejko Square, extending between ul. Basztową a ul. Warszawska, it is a good showcase of today's Kleparz. Lots of space on it, urban momentum, and the view of the ramparts and the towers of St. Mary is almost "landscape" beautiful. It is quite an unusual square: in the middle there is an oblong lawn with monuments standing on it, and there are two normal roadways along the lawn. Although it is located almost in the heart of Krakow, relatively little pedestrian traffic. And yet there is something to look at! From the south, the panorama is closed by the round shape of the Barbican, from the north, the baroque church of St.. Floriana. Between them, in the western frontage, they are adjacent to each other: closer to ul. Basztowa Academy of Fine Arts – the oldest art college in Poland, built in 1879 r. on the square donated by Jan Matejko, who, moreover, was the first rector of this university, and right behind it the District Directorate of State Railways – building that flows out into the 1889 r. for the most modern in Krakow, because it had elevators, own water supply and gas lighting. The central monument is a faithful reconstruction of the Grunwald Monument demolished by the Nazis. The prototype was funded by Ignacy Paderewski on the 500th anniversary of the Battle of Grunwald, i.e. in 1910 r. As long as the figure of King Jagiełło sitting on a horse, looking towards the Old Town can be easily recognized, the figures below pose problems with identification. A robust peasant standing in front, who rests on the sword, this is Prince Witold. Below him, in an agonizing pose, lies the Grand Master of the Teutonic Knights – Ulrich von Jungingen. On the right hand of Witold – Lithuanian warrior blowing the horn and a Teutonic prisoner (he has less hair than the Lithuanian). Witold's left – soldiers, and in the "back room" in a dynamic pose, the Polish peasant breaks the bond (breaks them off like that already 85 years). In front of the Grunwald Monument, the Monument of the Unknown Soldier was erected.

The oldest and undoubtedly the most valuable object within Matejko Square is the Church of St.. Floriana. Baroque exterior acquired in the 17th century. it is the result of the sixth rebuilding of the temple, which was built well before the baroque, w 1185 r., by the grace of Prince Casimir the Just. The church is the place of worship of Saint Florian, who during his lifetime served as a Roman soldier with the Emperor Diocletian. It is not without connection that this saint is worshiped in a place, where fires broke out very often. To be precise, it should also be mentioned, that the cult of St.. Jan Karny. The temple was patronized by Polish kings, a od XVI w. Jagiellonian university. It is also worth knowing, that in years 1949-1951 Karol Wojtyła was the vicar of the Kleparz temple, current pope.

To be the most valuable element of the rich, the mostly baroque and rococo furnishings of the church are considered to be the main altar with a painting of St.. Floriana, painted in 1686 r. by Jan Trycjusz, court painter Jan III Sobieski. In addition, on the outer wall of the chancel, there are sculptures from the workshop of Wit Stwosz, while in the treasury of the church there is a silver gothic reliquary donated to the temple by Władysław Jagiełło himself.