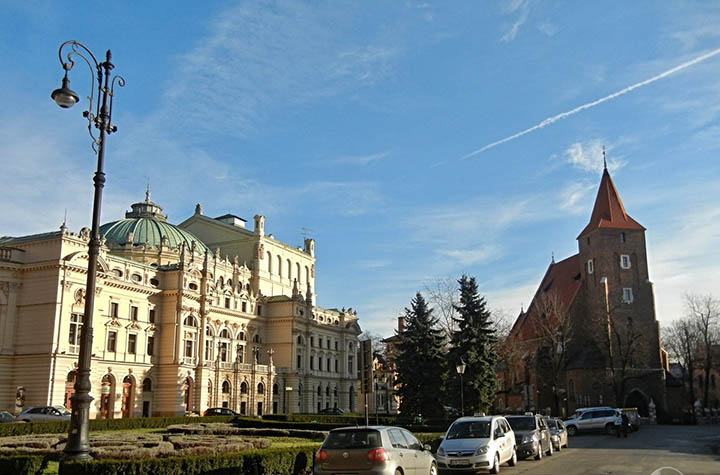 With St.. Spirit is connected with the history of Krakow hospitality, ahead of the founding of the first hospital in Paris: w r. 1220 the first hospital in Prądnik is established (today - White) supported by the Order of Canons Regular de S.. spirit, popularly known as ghosts. In year 1244 this hospital was moved to St.. Shower. The complex of architecturally valuable buildings survived until the 1980s. century and as a result of a resolution of the City Council it was demolished, preparing a place for a new theater.

J. Matejko, who wanted to save the old building of the historic hospital at his own expense, as a sign of indignation under the influence of the decisions of Krakow's "burzymurki", renounced his honorary citizenship of the city, writing to the City Council of. in.: “May they find Christ the Lord more merciful to themselves in the last hour, than they turned out and will prove to be against the venerable walls of the old hospital ″.

Hospitals were established in the following centuries: scholarów, st. Rocha, much later, St.. Sebastian for infectious diseases (1528 r.), hospital of the Brothers of Mercy (1609). In year 1679 the so-called. Crazy House - a hospital for the mentally ill, a w 1714 r. - SS hospital. Mercy at ul. st. Jana.

In the era of the Enlightenment, it is created on the initiative of Fr.. Hugo Kołłątaj - St.. Barbary, called academic, in the post-Jesuit building at the church of St.. Barbara in Mały Rynek. It was the first clinic in Poland, in which medical students practically practiced their profession. In year 1788 a new "general hospital", p. w. st. Lazarus in Wesoła (today Copernicus). In the further development, Krakow hospitality took over a part of Kopernika Street, building and arranging modern there, already specialized plants.

A few of the former hospital buildings have survived, reworked and refurbished. In the building next to the church of St.. Krzyża is home to the Health Center. Next - it serves as a theater prop room, and the third, connecting with ul. Szpitalna - the Pod Krzyżem house serves as the seat of the Directorate of the Historical Museum of. Krakow. Building from the 15th century. has a beautiful Renaissance outbuilding, unveiled today, after the demolition of the building of the former bus station. On the ground floor of the Pod Krzyżem house, a major museum facility of the Museum of the History of the Theater is being built.

Theater of. J. Słowacki. In the years 1891—1893, the architect Jan Zawiej ski designed the St.. Ghost Theater, modeled on the building of the Grand Opera of Paris.

Theater of. J. Słowacki, celebrating its 60th anniversary (w 1953 r.), at one time it plays a leading role in the history of the Polish scene. It was the first time that “The Wedding” Wyspiański and "Kordian” Słowacki. Great actors and great organizers of Polish theater, like Pawlikowski, Koźmian, Solski, they stood at the head of this institution and assimilated our audience with such Polish, as well as European dramatic works.

A painting by Henryk Siemiradzki fulfills the function of the curtain, donated to the theater, depicting in a symbolic form, in a series of colorful scenes, various types of theatrical art.

Behind the scenes is the famous dressing room of the great actor, director and director of the theater - Ludwik Solski. The walls of her, adorned by many famous artists with drawings and paintings, were restored after the destruction, made during the Nazi invasion.