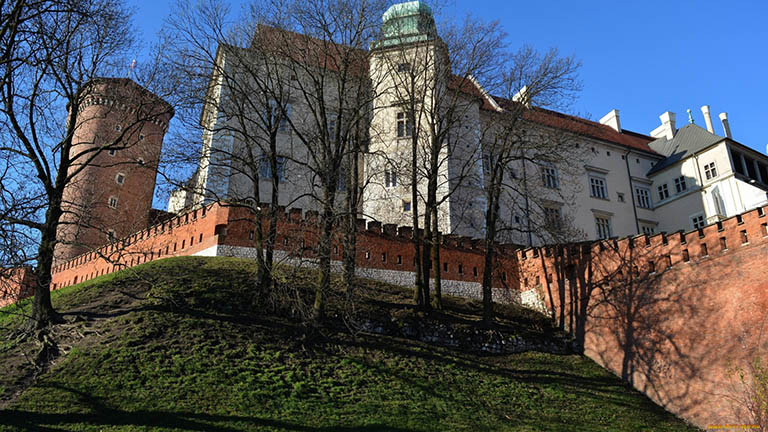 Loose early medieval settlements scattered on the northern side of the Wawel hill, populated with servants, being centers of artisanal production and commodity exchange, over time they obtain a commune organization under the influence of Western European patterns. These forms probably crystallize around 1220 r. under the influence of the initiative of Bishop Iwona Odrowąż. City boundary, on the eastern side, it is defended by the waters of the Vistula River, on the west side - swamps (The Frog Raven) - required the fortification of the entire city of Krakow.

The first Tatar invasion in 1241 r. accelerated these plans. Earth shafts, palisades and ditches were to defend the access to the city. End of the 13th century. and the beginning of the 14th - the time of Leszek the Black, Wenceslas of Bohemia, The elbow, and then Casimir the Great become a period of creation and strengthening of the city's defensive walls.

After the city was destroyed by the Tatars, 1241 r. and rebuilding and extending it by Bolesław the Chaste in 1257 r., city ​​boundaries are set taking the shape of a rectangle with rounded corners (800 mX700 m). Behind Łokietek, city fortifications reach the vicinity of Wawel.

Taking into account the great development of artillery in 1498 r., with the considerable help of Jan Olbracht, influenced by Western fortress architecture, - the so-called. barbakan (today also known as the Florian saucepan) - building on the plan of a sector of a circle with an internal diameter of approx 24 m, four-storey, with three-meter-thick walls, seven watchtowers and approx 130 shooting ranges, so about b. high firepower. Its task was to defend the city's arsenal, located between the Carpenters 'and Carpenters' towers and flanking, that is, the fire of the enemy around the outside of the walls. In addition, the barbican played an extremely important role in defending the city from the north, where the land was flat and dry. Saucepan with a drawbridge, gates and so-called. neck (walls parallel to each other, connecting the saucepan with the Florian Gate) he was a real obstacle for the attacker.

In fact, the defense of the city was entrusted to the guilds with the addition of a small one, permanent garrison, consisting of 40-120 soldiers. The guilds trained in shooting - in the so-called. celestial (shooting range), in the vicinity of the Mikołajska Gate - mainly with small arms, while outside the city - in artillery shooting. A shooting brotherhood with old traditions, supported by the last Jagiellonian - Zygmunt August, gifted by him with a chicken (kept to this day in the Historical Museum, including. Krakow), survived to 1939 r. It was held the traditional annual shooting for the title of King of Fowl. At present, efforts are made to resume this old Krakow custom.

Due to the development of artillery, Kraków's defense system turned out to be outdated, however, the state treasury did not have the resources to implement the new Italian-Dutch defense system. The nobility's fear of an increase in the power of the bourgeoisie also played a role, which could try to force the improvement of one's living conditions. Sebastian Petrycy mentions it in the first quarter of the 17th century., writing: “We are not allowed to pour down townspeople near the city, because soon people of the noble state are complaining about them, saying: peasants are built up and armed against us… Well, you have a great one… And he does not do it himself, and he will not give to the other ".

The Austrian partition orders the demolition of the defensive walls in. 1806, which lasted until. 1814. Then approx 10 years (1819—1830) the debris was removed and, at the request of the senator of the Free City of Krakow and the professor of the University of Feliks Radwański, gardens called Planty were established on the site of the walls and the moat. Krakow celebrated this valuable initiative by installing a plaque, dedicated to the creator of the Plant, in the defensive porch between the Florian Gate and the Pasamoników Tower, from the city side. These remnants of the defensive walls were preserved by the City Council as a result of the efforts of the same F.. Radwański (those are: 3 towers, 1 gate and barbican). The reason for allowing the walls to be left was an argument, which today can be considered humorous, and then put forward in Radwański's letter: „…for the sake of health, fondling educated women and children would be exposed to frequent fluxes, rheumatism, or maybe paralysis…”.

On the remaining walls, in summer, is organized by the Historical Museum, including. Krakow exhibition lasting several months, depicting the former appearance of the no longer existing towers, cycle of paintings by Jan Konstanty Wojnarowski. 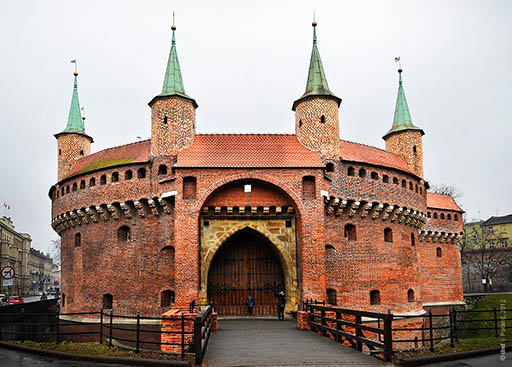 Part of the walls of today's barbican is below the level of today's street. It is a unique defense architecture of the late Middle Ages on a European scale.