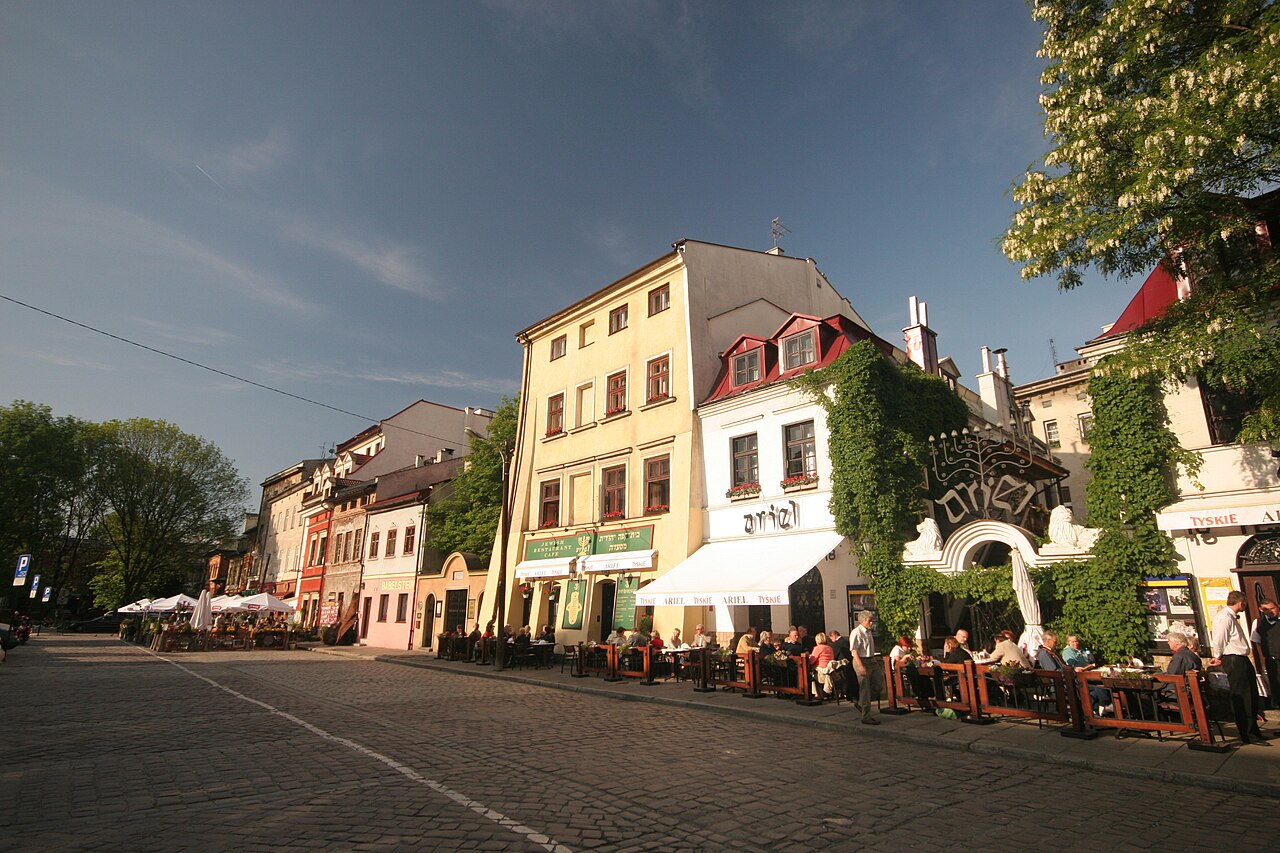 The streets of Kazimierz

Behind the northern wall of the Corpus Christi church it runs the. Joseph, named after Emperor Joseph II, formerly called Jewish. At no. 38 stands the High Synagogue, the highest in Kazimierz, funded by some "unfaithful Jew of Israel” in the period 1556-1563, who ordered to add a floor to his house and arrange a prayer room on it. High Synagogue, in its time one of the richest synagogues, destroyed during the war and then renovated, looks like this today, as if it had not been used since the times of Rabbi Remuh. Traces of its Renaissance splendor have been preserved in the portal and in the buttresses, adding power to the facade. However, a desperately sad corner in front of the synagogue, where moisture and emptiness reign, highlights the "crowd absence" of expelled Jews very strongly.

He is the gateway to the "Jewish Kazimierz Lost" Szeroka Street looking more like an elongated square, which was once the commercial center of the district. It took its final shape in the 16th century. Today it is one of the most important tourist attractions in Krakow, though it is generally empty and silent anyway. There are old residential houses on its outskirts, goddesses, ritual houses and a cemetery. As you can see, it is a street of great and meaningful contrasts: Modern and restored buildings squeeze into the row of dingy tenement houses, in which there are cafes, galleries and cultural centers. There is an exclusive restaurant next to the old cemetery.

The oldest monument of Jewish religious architecture in Poland is located in Kazimierz – is him Old Synagogue (under no. 24) standing at the south end of the street. It was built by Czech Jews in the second half of the 15th century., that is, in the period of a rapid increase in the Israeli population in Kazimierz. In the synagogue, where the seat of the kehilla authorities was also located, religious life was concentrated, administrative and cultural activities of the inhabitants of Kazimierz. Currently, you can admire its Renaissance face, nadane jeszcze w latach 1557-1570 przez florentczyka Mateusza Gucciego. For years 30. XX w. a special prayer for Casimir the Great was said in the Old Synagogue, considered by the Jews as a benefactor and protector.

The synagogue survived many fires and destructions, but nothing has lived up to the ravages of World War II, when the Nazis devastated the interior, vault and roofs, and they plundered all the rich equipment. After the war, the building was restored and handed over to the Historical Museum. The collections under the title Traditions and Art of Polish Jews are located in former prayer rooms. In addition to valuable ritual items – piggy bank, the altar, bimu (that is, a platform for reading prayers), you can see here, among others. old photographs reflecting the spirit of old Kazimierz, books and pictures, among which was a copy of the lost painting by Schylok and Jessyk Maurycy Gottlieb. An exhibition devoted to the history of the extermination of Krakow's Jews has been organized in a separate room.